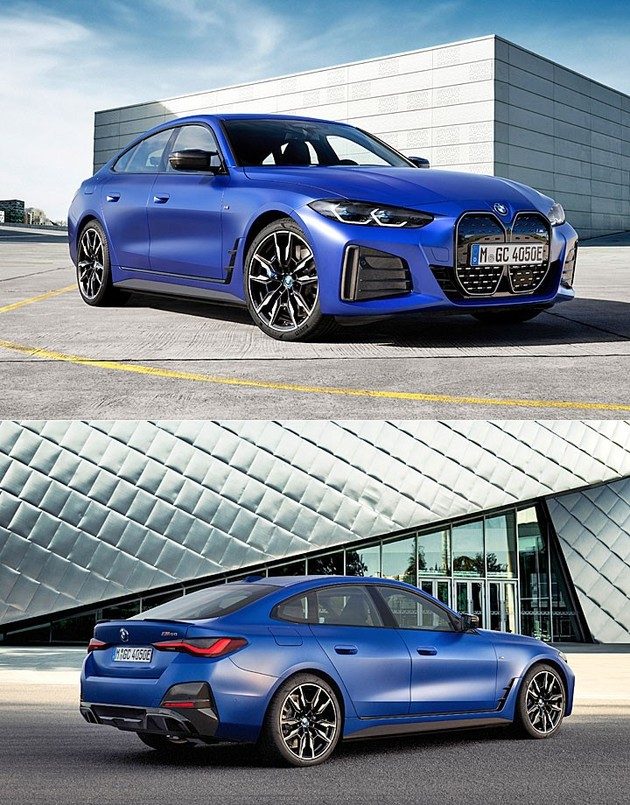 After continuing the release of appearance and interior information many times, the original BMW factory will premiere the new electric car series such as North American and European standard i4 and iX on June 1, 2021, and predict that the iX M60 will be It will be published in 2022, but the price has not been announced. In addition, as the first i-series electric car with the M nameplate, part of the i4 M50 information is also revealed in the film. In addition to the power performance of 544 horsepower, the maximum endurance also reaches 600 kilometers.

According to the information that has been published so far, the i4 car system is equipped with a lithium battery pack with a capacity of 83.9kWh. The body size is 4,783×1,852×1,448mm, the wheelbase is 2,856mm, and the drag coefficient is 0.24. The original factory emphasizes its body. The center of gravity is 53mm lower than that of the G20 3 Series sedan, and the ground clearance of the body is reduced to only 110mm. There are currently two power options, i4 eDrive40 and i4 M50.

The i4 eDrive40 adopts a rear-mounted rear-drive single-motor setting. The maximum power output is 250kW, about 340 horsepower, and the maximum torque is 430N.m. The i4 eDrive40 weighs 2,050 kg and can reach zero to zero in 5.7 seconds. Accelerate at a speed of 100 kilometers per hour, and the maximum speed after the electronic restriction is 190 kilometers. As for the endurance performance, it has a maximum endurance range of 590 kilometers under the WLTP specification.

In addition, as BMW’s first i4 M50 that combines i and M, it is changed to a four-wheel drive setting with 1 motor at the front and rear. It has a maximum horsepower of 400kW, 544 horsepower, a maximum torque of 794N.m, and a vehicle weight of 2,215. In kilograms, it only takes 3.9 seconds to accelerate from a standstill to a speed of 100 kilometers per hour, and the electronic top speed is about 225 kilometers, and the maximum cruising range is 510 kilometers.

In terms of charging specifications, both i4 eDrive40 and M50 support up to 200kW DC charging under the 400V architecture. The original factory emphasizes that with 200kW DC fast charging, the i4 eDrive40 can supplement 164 kilometers of battery life within 10 minutes at the fastest; i4 M50 does It can add about 140 kilometers of battery life in just 10 minutes. Based on the maximum power of 200kW and the charging time from 10% to 80%, both i4 eDrive40 and M50 can be replenished to 80% in 31 minutes.

Through the live video, we also got a glimpse of the interior design of the i4 M50 for the first time. The first thing that catches our eyes is the continuation of the i4 technology interior layout. The 12.3-inch digital instrument and the 14.9-inch central interface form a large connected curved surface. The screen is equipped with a three-frame steering wheel of the M model. The seat is the same as the M3 and M4 with a sports car seat with better coverage, and the M-shaped model nameplate is inlaid in the middle of the neck to declare its sports identity.

The iX car series has a body size of 4,953×1,967×1,695mm and a wheelbase of 3,000mm. Currently, there are two grades of xDrive40 and xDrive 50 available. xDrive40 uses a 70kWh battery, four-drive power with 326 horsepower, an endurance of 372~425 kilometers, and supports up to 150kW DC fast charge; iX xDrive50 has a maximum output of 385kW, approximately 523 horsepower, and can accelerate from a standstill in 4.6 seconds At a speed of 100 kilometers per hour, the maximum endurance is 630 kilometers (WLTP specification), and it supports a faster 200kW fast charge.

The high-performance iX M60 model released in 2022 for the first time in the first announcement of the silhouette preview reveals its dual-motor drive system in the front and rear, and the maximum power output can reach 440kW, about 600 horsepower performance.

The iX xDrive 50 has a maximum output of 385kW, approximately 524 horsepower, and can accelerate from a standstill to a speed of 100 kilometers per hour in 4.6 seconds.